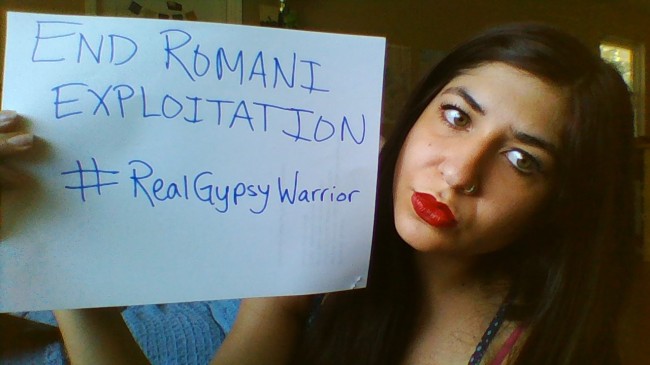 In case you didn’t know, I really love fashion. I love it as an art form with all its complications. But I absolutely loathe the fashion industry’s exploitation of Romani people. I got an email today from LOOKBOOK, a mailing list I was subscribed to, about a festival they are sponsoring in partnership with the enormously racist Gypsy Warrior fashion retailer. This is their pitch:

“Calling all gypsies! Are you a true Gypsy Warrior? Do you love adventure, dance to the beat of your drum? Create your own trends and believe in the magical moments and never ending fun? If you answered yes to these questions, then hell yea, you are a true Gypsy Warrior! “

OH HELL NO. A true Gypsy Warrior is a Romani person (or ally) who rights for Romani rights, for representation, who faces systemic racism and perseveres, who educates, who works to see that Roma are no longer treated like parasites. A real Gypsy Warrior thinks that this is a bunch of racist bullshit. I wrote a letter to that effect.

To Whom it May Concern,
I was offended by the email I received “LOOKBOOK x Gypsy Warrior music festival.” The email begins, “Calling all gypsies [sic]….” First, the word “gypsy,” in the lowercase, is an ethnic slur for the Romani people, an oppressed ethnic group. The company Gypsy Warrior exploits harmful Romani stereotypes to sell a product. In light of the current Romani human rights crisis, which Amnesty International has called “Europe’s shame,” this is a very tactless and offensive move and I am disappointed that LOOKBOOK is joining in with the exploitation. For more about the Romani human rights crisis: http://www.amnesty.org/en/roma. To take the word “Gypsy” and turn it into a romanticized consumerist image, it makes a costume out of an ethnic group and a culture. “Gypsy Warrior” is as tasteless and offensive as “Jew Warrior” or “Asian Warrior.” This is especially problematic when so many Americans have no idea that Romani people are actually people and not some figment of fantasy or a lifestyle choice, as the media repeatedly suggests. Roma were murdered, en masse, in the Holocaust. They were slaves alongside African Americans in America. They were slaves for four centuries in Europe. Romani people today are denied safe housing, education, health care, and jobs. Antigypsyists bomb the settlements that Roma are forced to live in without electricity or plumbing. Police in Europe in America target and brutalize Roma because of their ethnicity. Romani women suffer frced sterilization at the hands of their government. Romani mortality rates are significantly higher than non-Roma. This is not the glamorous “Gypsy Warrior” that the media likes to draw, and the constant perpetuation of “Gypsy” costume, sexualization, and romanticization belittles and obscures the real and desperate fight for Romani rights. For this reason, I will no longer be part of LOOKBOOK’s mailing list. As a Romani woman and a humanitarian, I am offended and disappointed.
Sincerely,
Jessica Reidy

If you want to hear more about this issue, here’s a link to my article in Quail Bell Magazine “Gypsy Soul: Romani Fashion and the Politics of Dressing Gypsy”. In it, I’ve included links to some great sources on the topic including Oksana Marafioti, Dr. Ian Hancock, and Erika Varga.
As part of the contest, they want you to “Just post your most festival worthy look with at least one Gypsy Warrior item to this contest and Instagram.” I have an alternative suggestion. Please, take a moment to post your most protest-worthy look with at least one sign that says “END ROMANI EXPLOITATION. #RealGypsyWarrior” via Twitter, Instagram, and Facebook and raise awareness. Remember the hash tag. Post and share if you believe in human rights and the importance of media representation. Post if you’re friends with me and want to show your support. Post if you love a Romani person. Post if you are a Romani person. Post if you love real “Gypsy” culture. Post if your hair looks good today. Post. And let me see what you posted via Facebook,Twitter, and WordPress. This is what a real Gypsy Warrior looks like.

One thought on “Alright bitches, this is what a #RealGypsyWarrior looks like”