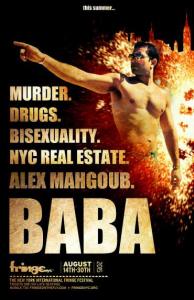 The poster for “Baba”

On behalf of The Cambridge Writers’ Workshop, Viktor Pachas and I went to The New York Fringe Festival to see Alex Mahgoub’s critically-acclaimed one-person show, “Baba,” chronicling the true story of his father’s murder and life after the trauma. We were so glad we attended– the play skillfully navigates the tangle of loss, identity, masculinity, and sexuality, and then we were fortunate enough to score an interview with Alex on film, thanks to Alex’s generosity and Viktor’s videography expertise. It was so great to talk about the overarching themes of his performance, and Alex was full of life and intelligent things to say. Check out our review, “Baba’s Ghost,” and the video interview with Alex here, plus some wonderful pictures of Alex and his Baba. Alex also has a book in the works, #SelfieGeneration, so be on the lookout for that.

This was my first collaborative review, and what a lovely experience. Viktor and I make a pretty good team. I feel like if you can write something with another person without killing each other, that’s a win, and if you actually enjoy the process, that’s like a kitten crossing the finish line at an ice cream marathon. If you’re not familiar with him already, here’s Viktor’s impressive bio: 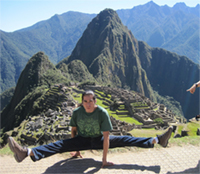 Viktor Pachas is a freelance videographer, illustrator, Spanish translator, and musician. Viktor produces videos for Cambridge Writers’ Workshop retreats and workshops, and is a contributor for their blog. After finishing his studies in Molecular Cell Biology at UConn, he began producing promotional videos for Singapore General Hospital in cooperation with Duke University/NUS while working as a Circadian Research Assistant. Studying Flamenco Guitar and performing in Granada, Spain, he made videos to market a chain of hostels in Andalusia and Morocco. Recently, Viktor shot material in Paris for David Shields’ upcoming movie Black Planet produced by James Franco. He currently lives in New York City and is an instructor for Outward Bound and Global Works. He performs solo as a singer/songwriter and is a drummer for A Thousand Ships when performing in the New England region. Viktor is currently working on illustrating a comic strip based on his travels.

You can listen to his music here: https://victorpachas.bandcamp.com/