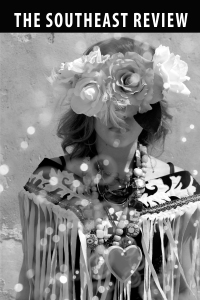 The Southeast Review issue 32.2 is out and available for purchase! It’s chock full of gorgeous poetry, fiction, and nonfiction. I’m the current Art Editor, and I’m so in love with the artwork in this in issue. Alexa Torre’s exquisitely beautiful photography captures the liminal space between contemporary and traditional Mexican culture, and Julia Gfrörer’s dark mermaid comics tantalize and chill you to the bone. Order your copy today!

Sometimes I get requests from people to do interviews because they’re writing a Romani (Gypsy) character and want to use the life of a real live Gypsy girl to write her, and I always feel uncomfortable about the idea of divulging my life story for another writer’s creative gain. My friend, Misha Rai, urged me to turn those feelings into an essay, and because Misha’s advice is always brilliant, I did it. And now I’m honored and stunned to have “Esmeralda Declines an Interview” in The Missouri Review blog.

No offense intended to anyone who has asked me to interview with them as research for their book. It’s wonderful that you want to write well-rounded Romani characters, and I’m flattered that you thought of me. If you are struggling to include Romani characters in your work, then my advice to you is this: “If you want to be inclusive, then read and support the writers you want to include. Don’t ask to take our lives for your own gain.” I’m sure your intentions aren’t nefarious and I applaud your efforts to write mindfully. Just be mindful in your research too.

A good resource for you to find Romani writers is ‘ list of Romani Authors. I also have a list of “20 Gypsy Women You Should Be Reading” at VIDA: Women in Literary Arts. There are many more places to look, but this is a good start.

Happy reading! And thank you to The Missouri Review and Misha Rai– I love you to bits.

P.S. Check out “Housewives, Mothers” by Misha in The Indiana Review– it’s one of my favorite stories.

Can’t say how excited I am about The Great Gatsby-esque Cambridge Writers’ Workshop Newport, RI Writing and Yoga Retreat on April 2-5, 2015. Not able to make the whole weekend? Partial attendance is fine, too. Special tuition rates may also be available to students. Kathleen Spivack, Stephen Aubrey, Diana Norma Szokolyai, and Rita Banerjee will be teaching writing classes, and Elissa Lewis will be teaching yoga. I’ll be telling fortunes and offering energy healing (Reiki) sessions because that’s the kind of girl I am.

The deadline for admittance into this AMAZING retreat is February 20, 2015. There are limited seats, so apply early!

Check out the CWW Facebook page or go to http://cww.nyc for more information. 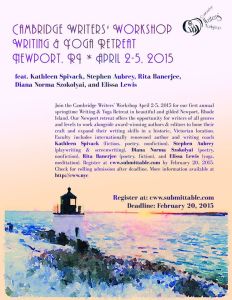 “He died of old age in solitude, without a moan, without a protest, without a single moment of betrayal, tormented by memories and by the yellow butterflies, who did not give him a moment’s peace, and ostracized as a chicken thief.” —One Hundred Years of Solitude

The great Gabriel García Márquez has died, and there is little I can say about it that would be of any use, comfort, or cleverness to anyone. But, I have a lovely memory of Márquez, and now feels like a good time to write it out.

When Len and I landed in Venice, he found a very well-loved copy of this novel, brittle, yellow, and battered from age, perched on the lid of a trashcan in the airport. “It felt like a gift,” he said, “a gift from the trash.” He had been wishing for a book, and then this book he always wanted to read appeared for him when he went to throw his coffee away. We guessed the owner recognized it was in too much disrepair to be read again, but felt too guilty throwing away a work of art. The pages were slipping out, the covers were tattered and separating from the pages, but Len meticulously and carefully read each page as we traveled on train and on foot, in cafes and rented apartments, even though many of them snapped off as he turned them. He loved the story, was in raptures over it from city to city, and hoped to leave the book somewhere for another traveler to find. But by the time he finished, we were in Rabac, Croatia, and the book was unsalvageable: a collection of loose leaves constantly threatening their order. That night, during the full moon, Len and I walked out onto a rock that jutted out into the Adriatic like a sea-altar. We took wine with us, toasted to the moon, and poured a generous sip into the sea. He placed the book on the stone where it dipped like a bath and recited his favorite lines in the moon’s general direction while we waited for the tide to rise enough to take the book away. I drank wine and listened to him. I thought, love is a lush ritual. Silver-white moonlight seemed to run slick-straight across the ocean from the horizon all the way to our rock, and I wondered how many things only look the way they do because of where we stand in space. As the water rose and lapped across the stone, pages loosened and swam out in different directions, slipping down through the clear water to the sand and white coral below. The sea eventually swelled enough to cover our ankles and wash the book away. We watched it tumble and unravel under the surface. I thought, “As above, so below.” A small, orange crab scudded across my foot and caught my toe with its claw so gently, as if it only meant to steady itself before drifting off again. A page washed back onto our rock again and touched both of our feet– one with yellow butterflies.

All hail “The Bammer” and her seraphic entourage of pugs, maker of dreams and angel of satire!

If you remember my post back in December in which I made my first invocation of Saint Maria “The Bammer” Bamford and asked her to grant my manifest destiny magic wish to return to Europe and research my novel some more this summer, then congratulations and thank you, you’re one of 5 or so people who reads this and gives a flying bat shit about what I write here. (5 might even be too optimistic.) If you don’t remember but you’re still reading anyway, thank you too! Miracles do happen.

I’ve been waiting to write this so that I could figure out what I want to say, how can I eloquently thank the All Mighty Bammer for her inspiring and guiding light that has led me to my destiny, but I’ve delayed long enough and I’m not any wittier than before so I’m just going for it. You see, after I posted my tongue-in-cheek shameless begging for someone out there to help me get to Europe, it happened. Last year I wet on a fantastic Yoga & Writing Retreat in Verderonne, France, led by The Cambridge Writers Workshop, and it was art-changing. I learned so much, I wrote so much, I was in France, my novel is set in France, I swam in a moat, I did yoga in a garden on the chateau grounds… it was a good thing. I also spent all my money going there so it was a once-in-a-decade-or-two opportunity. But little did I know that the directors were reading my plaintive wails! They got in touch and were like, “Yo girl, you want to teach Fiction on the next retreat? Would that help?” And I was like, “Um. Yes. That’s helps a lot.” Except I was jumping up and down and screaming. 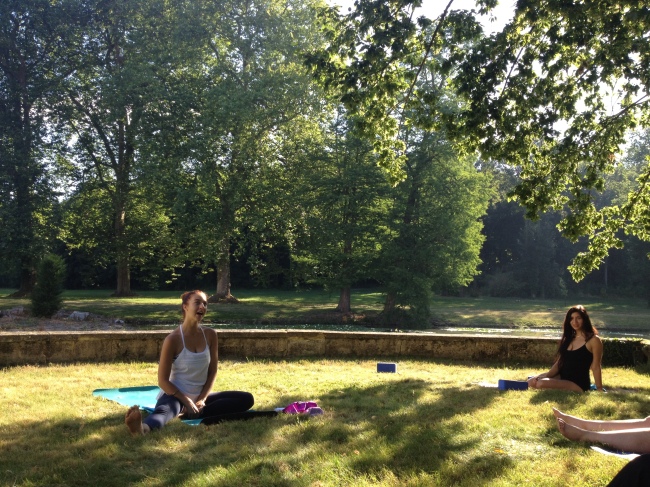 Yoga in the garden beside the moat with wonder woman yoga teacher Elissa Lewis, photo by Rita Banerjee

So now, all I want is for wonderful people to come and do this with us. I’ll be teaching a workshop on novel-writing, the fabulous Elissa will be teaching yoga twice a day as well as an art workshop (she’s a marvelous artist too), and the fantastic Cambridge Writers Workshop co-founders and co-directors Rita Banerjee and Diana Norma Szokolyai are both wonderful poets, scholars, and fiction writers, will be teaching workshops on their specialties. It’s going to be magnificent. 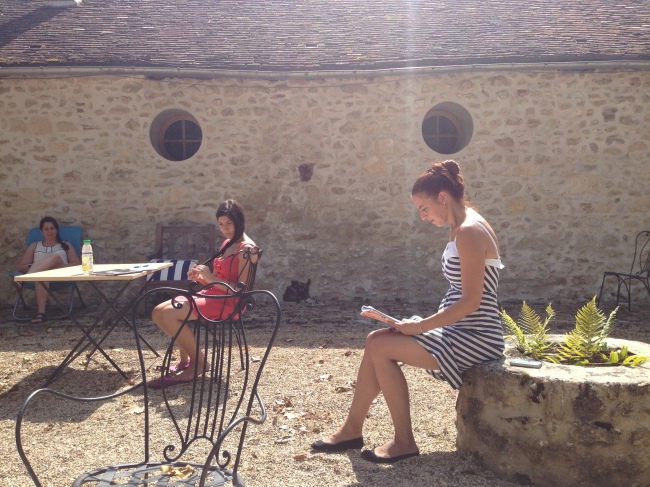 Getting some writing done in our private courtyard. Photo by Rita 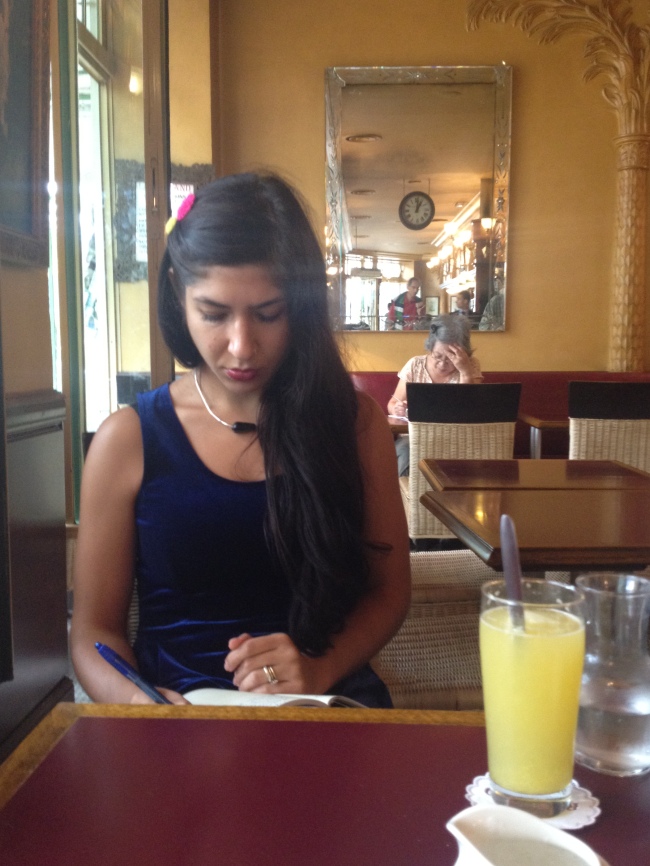 Getting some writing done in Paris– I was doing a character exercise on the lady behind me. Photo by Rita

There are optional field trips to Paris, Chantilly, and Versailles as well, so there’s time for work and time for adventures. In Paris, we’ll probably stop in at Spoken Word Paris for a reading.

There will also be quite a bit of eating homemade delicious French food, and even though I was raw vegan at the time (I fell off the wagon since, getting back on the wagon, slowly) the spectacular chef Joelle not only accommodated me but ended up trying it herself! She is so kind, and much of the food is organically grown right there on the grounds. She even makes her own yogurt! 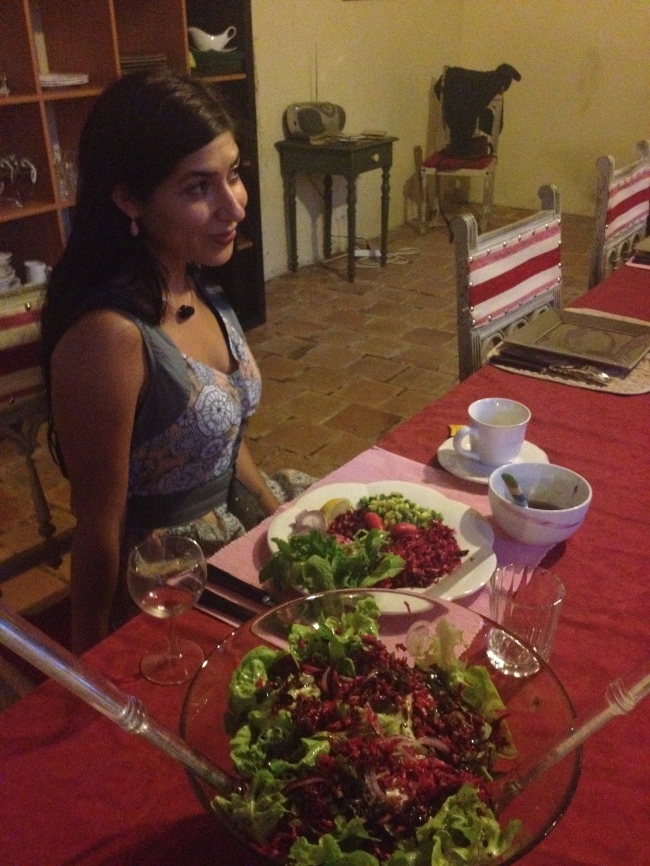 With a gorgeous salad. Photo by Rita

The dinner table. Photo by Rita

Here are the details:

The Cambridge Writers’ Workshop Annual Yoga & Writing Retreat will be held from August 7 -20, 2014 at the Château de Verderonne in Picardy, France, located approximately 50 miles north of Paris. The conference features workshops in poetry, fiction, and creative nonfiction, as well as craft of writing seminars, art classes, free time to write, and daily yoga and meditation classes.  Writers of all genres and levels are welcome. Yoga practitioners of all levels are also welcomed (we have experience adapting the yoga sequences to meet the level of beginner-advanced participants).  Participants are encouraged, but not required, to bring their own long-term projects to work on.  Whether writers are beginners or advanced, CWW workshops have a history of success in generating new writing.

Optional excursions to Paris and Chantilly are also available to participants.  The faculty includes Rita Banerjee, Diana Norma Szokolyai, Jessica Reidy, and Elissa Lewis. The cost of the conference is $3,200, which includes lodging, meals, writing workshops, yoga classes and transportation to and from the airport.

So, I hope you, dear reader, apply for the retreat. I’m so excited to be there. Praise the Bammer! 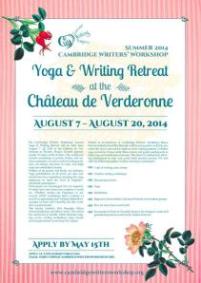 The Tumblr for the last retreat: http://cambridgewritersworkshop.tumblr.com/post/56372789267/day-1-france-cww-2013-writing-yoga-retreat-in 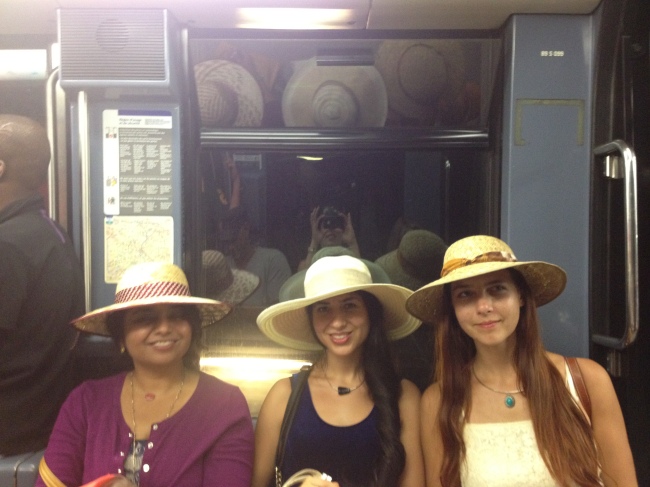 Many hats with Rita & Elissa

All of us in Versailles. From left going clockwise: Tiffanie, Norma, Elissa, me, Rita, and Kareema. I felt so lucky to work with such brilliant and delightfully kind women!

I’m the Art Editor for The Southeast Review, which is one of my favorite things to do, and another favorite thing is conducting these Q&As with writers and artists who I admire. Ian Hancock, TJ Anderson III, and Christine Stoddard are all brilliant and fascinating people, so naturally they gave brilliant and fascinating answers. Check out the full interviews at The Southeast Review.

First up is renowned Romani writer, academic, and linguist Dr. Ian Hancock and his views on the power words, books, and inspiration. Next, poet and visionary Dr. TJ Anderson III examines the influences of mindfulness, surrealism, music, and adventurous poetic-living on the creative process. And lastly, writer, artist, and creative entrepreneur Christine Stoddard discusses Quail Bell Magazine and the magic of folklore, the real and the unreal, and “rocking many hats ” with her many, many impressive projects.

So read! Learn how to beat writer’s block through paintings, how to find metaphor in the Romani language, how to be be an artistic entrepreneur, how folklore and social justice color our words, and how the surreal and the real blend our lives with art.