Let us take you through a brief history of how our flag, language and anthem were officially recognized. In the end, embrace with us our diversity and hop on board for our visual journey, ‘from the caravan to the palace’:

Forty-three years have passed since the First World Roma Congress was held in Orpington, near London, in 1971. Officially, 8th of April was ratified as an International Celebration Day during the 4th World Romani Congress held in Poland, in 1990. Since then, this date has had a special place in the calendar of all Roma, as it marks an important moment in the history of the Romani Emancipation Movement. It became the day during which we celebrate the International Roma Day, a day to bring forth our beautiful, diverse culture and traditions, but also one of remembrance. The many hardships Romani people faced along the history, from the early days of their arrival in Europe, to the dire conditions they are still confronted with in today’s society, should not be forgotten in our quest for dignity.

SPEAK OUT! AND BE THE CHANGE On The International Romani Day! In light of today’s celebration, the International Romani Day, here is a picture with Alina Covaci Taba, one of the 5 women who wished to “Speak Out and Be the Change” and was along-side the Romedia Foundation when the “I’m a Roma woman” campaign started.
“We are five Roma women who wish to build a movement powered by us Roma women to shape our own image and empower ourselves and our communities as we share our experiences, our view of current issues, our vision of the future.”
SPEAK OUT! BE THE CHANGE!

Esma Redzepova sings The Romani Anthem to honor those Roma and Sinti who perished in O Porrajmos, the Holocaust

A video history of Romani and Traveller people http://www.youtube.com/watch?v=Q6wSLfGBVGY

What can I do today?

For International Roma Day, use social media to inform your friends and followers about Romani culture and the current fight for Romani rights. You can post about it in your blog and/or take screen shots of your International Roma Day statuses, tweets, Pinterest, and Instagrams. Use hashtags wisely– for example, #nohatespeech, #RealGypsyWarrior, # RomaDay #RomaRights #OpreRoma

You can also take a more active stance, for instance, write articles, organize protests, inform companies like Gypsy Warrior, Junk Gypsy, Band of Gypsies, and Spell and the Gypsy Collective that use the word “Gypsy” and the associated stereotypes as a brand that they are using an ethnic slur, exploiting an oppressed minority, and diminishing the fight for Romani rights. You can do this through email, Facebook, or Twitter. You can address and correct racist, offensive, stereotyping, and misinformed comments and articles about Roma. Social media is a powerful activist tool. 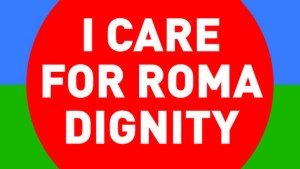 Some of my pieces about Romani rights and representation:

“We Rise Up” Short Story of the Week in Narrative Magazine, Pushcart nominated