I’m re-sharing my “Halloween Savvy” tips in Quail Bell Magazine for coming up with a smart costume and not appropriating the shit out of marginalized cultures like Natives and Roma (or “Gypsies,” the racial slur we’re more commonly known by). Skip the Pocahottie mini-dress and Sexy Gypsy blouse and skirt, and put together something clever, which really is a much sexier way to play it after all. If you ever wondered why appropriative or exoticizing costumes matter, I also touch on that with some fascinating/upsetting history about the “sexy” stereotypes. Plus, I’ve got some ideas for if you want to dress up like a badass character or real person who isn’t of your race but you’re not sure how to proceed.

In the featured image is is my last costume, Little Red Riding Hood Who Killed the Wolf Herself. Taking an empowering, dark, or funny spin on a beloved folk story is always interesting and innovative, and it doesn’t hurt anyone or reinforce racist stereotypes. It’s just pure fun.

This year, I’m going to be a punk-rock unicorn, which is my take on Audre Lorde’s book, The Black Unicorn. Lorde is one of my favorite poets, and a self-described “black, lesbian, mother, warrior, poet.” It should go without saying that it would be crazy offensive and downright weird to try to make my skin darker to become Lorde. It’s much cooler to have my costume embody what I love about her– her writing. My dressed-in-black unicorn will also have a touch of Stormy’s horse Skydancer thrown in from Rainbow Brite because damn I loved her sassy thunder and lightning spitting hooves! I think Audre Lorde would be into that too. 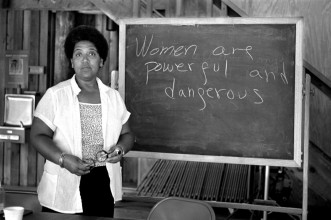